That Awkward Feeling You Get When You Realize No One Understands You...

The other day, I was out running some errands when I came across this song on the radio. I immediately thought, "Whoa! This would be an awesome song for my spinning class!" The very first thing I did when I got home that night was look up the song on YouTube:

Now, I don't know if many of you have read the novel, Grendel by John Gardner, but that was a book that I had to read for my high school British Authors class.

Keep in mind, I haven't read that book since I was about seventeen, but after watching this video, my mind was BLOWN. The "monster" character in this video is almost identical to Grendel - Beowulf's nemesis.

I remember when I first saw this video I started jumping up and down and practically running around my tiny apartment because I realized then that the modern day music industry was using an idea and character from an epic poem!

I just couldn't get over the fact that Grendel, epically famous for being this evil antagonist, was just a misunderstood creature that wasn't accepted by modern society at the time. Plus, Wealtheow, the primary female character of those epic poems, was the heroine who helped make Grendel understand that there was a consequence to his actions, and therefore, a meaning to his existence.

I mean, come on, even the creatures look alike!

I mean, is it just me, or is there clearly a similarity between the two?

What's worse is that when I discovered this similarity, I tried explaining all of this to my roommates and instead of being met with my equal amount of enthusiasm I was met with blank stares and looks of "I have no idea what you're talking about."

Story of my life:

So, if you have ever read John Gardner's, Grendel, or are now the least bit interested, I highly recommend it. It does take some getting used to it as it focuses on self-awareness and finding the meaning of existence, but it's an incredible read. Plus! Once you've read it, we can relate on how similar the ideas are, and I'll have at least one person who understands what I'm talking about! 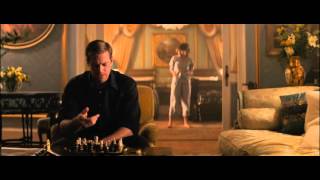